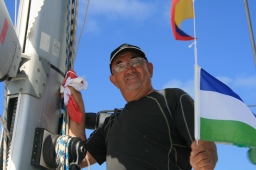 Isabella is the largest island of Galapagos and one of the pearls of the Archipelago.  It is easily recognized because its shape resembles a sea horse.  At a distance of over a hundred miles, we sailed for a day in a very pleasant atmosphere, talking as well as joking about the unusual stories we picked up at San Cristobal.  The most interesting one was about “Lonely George”, who was formerly the oldest gigantic turtle.  He was the last remaining male of that particular kind, whom had the scientists 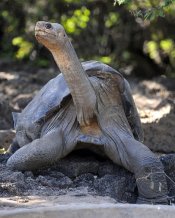 harshly forced sex to extend its species.  According to their opinion, George was at the very peak of sexual power but unfortunately did not show interest in fatherhood, so it remained the only hope that George would have is that maybe one day he would become a middle-aged father.  He lived on the island of Pinta and as the most lonely animal on the planet, has received well-deserved place in the Guinness Book of World Records.  He was later transferred to Santa Cruz Island, where he died at the Breeding Centre.  “If I were to have a sexual rise whilst being one hundred years old like George, I would also not bother myself with fatherhood”, was Peter’s comment “even more, I would open a harem and live in

it as a Sultan”, he added with a big smile.  Poor George, he was killed by sex in the best of years.  If it weren’t like that, maybe he would live several decades longer.  The night was beautiful, romantic and full of enjoyment, which Peter accepted with great caution in regards of George’s experience.

On the anchorage of the small fishing village Puerto Villamil, we have sailed in about five that afternoon. At the entrance, we noticed that the bay is calm and protected as well as filled with underwater reefs and shallows.  By the “Embarcadero” dock and the small club “Nautico” we could have come with dinghy, but we used taxi services to avoid complications

through a very demanding rocky maze. “Why complicated when it can be easily”, was our moto, so we have elegantly disembarked on the pier and walked lightly towards the city. Puerto Villamil is situated in the middle of idyllic sandy beaches stretching along the coastline.

In one of a series of affordable restaurants, we picked up some information about the city itself.  The first thing we discovered in its immediate vicinity it was a park with local brackish water and flamengos in its, called 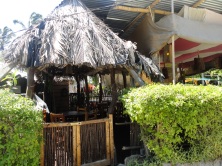 “Flamenco Park”. Looking at the exquisite pink coloured feathers of these exceptionally beautiful birds belonging to the swamp was like looking at paradise.   These creatures are interesting as well as shy in nature therefore we were able

to watch and photograph them only with distance. Due to the short stay, the mega prices and sweltering temperature in the air, we did not explored Isabela as we had

imagined. Disastrous heat closed our doors before we went on the six-mile wide crater of Sierra Negra, the most active volcano in the Galapagos. It was a hot story without any sense that turned

into Hamlet’s question “do it or not”. You believe me, it was not hard to find the answer in the pleasant shade of the restaurant, enjoying the cold beer, 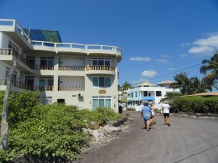 laughter, and fun. In the end, it was supposed to be experienced. After a very pleasant evening, we started preparing 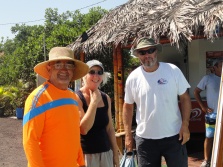 for the continuation of the journey and meeting with new beauties and excitement. Leaving Puerto Villamil in the foam furrow of Meermowe, we left Isabela in the direction of Santa Cruz Island, located in the center of the archipelago.

We anchored in a fully open bay, in front of the capital of the Galapagos, Puerto Ayora.  Swaying on the waves, we found our own place between excursion boats and the other modern wanderers under sails.  We were excited because we knew we would soon leave this unique natural park in the world and start with the longest voyage without land up to French Polynesia.  The life on Galapagos, after Islands of Cristobal and Isabela, became somewhat a routine, so we did not

waste time to ordering taxi to drive to the city.  Under the equatorial sun, on the dock well-known representatives of the animal world, sea lions and iguanas greeted us.  Puerto Ayora is extremely neat and a very pleasant

place.  In the harbor and on the waterfront it ruled a real life, which is not uncommon for small coastal towns.  Trade on the street takes place at a temperature of more than 40 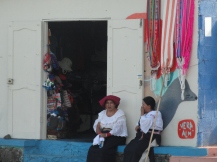 degrees.  Air conditioners are seen only in dreams, and the prices are not at all shy.  Fish was in abundant and is very cheap.  The only ones, which have been ok with everything in this surounding,

were the pelicans.  They are well intentioned and remarkably agree with the fishermen. 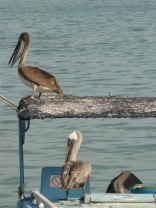 We walked around and found fewer grocery stores and fruit market, where we the day before departure, made a small shopping. I did not miss a

opportunity to shorten my hair at the first hairdressing salon we’ve had on the way.  Numerous Italian restaurants were a real surprise for us.  In any case, we 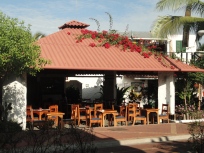 stopped in one of them before returning to the ship.  Unlike expensive wines, the beer had been poor quality therefore we have, with a fruit cocktail, ended up the evening.  The favorite Nachos dinner, prepared on board, was more than 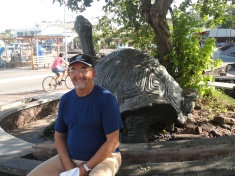 hit.  The Mexican crackers with which

we pleasantly chated about further navigation, spoke seven languages.  Until we went to sleep we studied maritime charts, satellite navigation, weather conditions, as well as made strategy and organization of further trip.  As usual,

Dino and Pipo helped us in it.  Meermowe was in the top form for the fierce rhythm of sailing.  “Only that we are still missing is the fruit market on Saturday and we can go”, was the conclusion with which we happily agreed and gone to bed.  How is Academy Bay was full of hammerhead sharks, by no means we did not think

about swimming, so the last day in Santa Cruz were dedicated to Tortuga Lagoon.  The morning was full of big excitement, hurry, and extraordinary mood.  Dino and Pipo who decided to come with us, they had contributed of that sympathetic hurryness.

This bay, due to its beauty, is one of the most famous on Santa Cruz. It is about a forty-five minute walk from the city center. The winding stony path surrounded with cactuses, palo santo and matasarno trees, led us to the spacious coast, which is elegantly drowned in the Pacific Ocean. It was hot and windless, like in an oven set at 350 degrees without a fan. While we

chilled ourselves with water from the bottle, how we would not melt like ice cream, Dino and Pipo were deeply submerged into the shade of the backpack. At the end, the

painstaking walking was rewarded.   In the front of us there was stretches of spectacular white sandy beach with the beautiful iguanas, as our dear friends called them “angry beasts” of which they 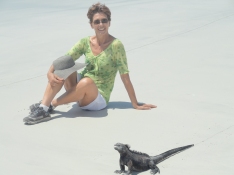 were scared. Full of the fearness, they fell to the bottom of the bag as a lego dice. It took us the whole eternity to emerge them out. With a bit of

persuasion, by the end of the day, they even became friends with these sweet “negro candies” so we even managed to make some happy photos. The Playa Mansi, with one part being describe as having strong currents and the kick of powerful waves over the sandy dunes whose noise was

spreading along the beach like an echo. The second part is in a very quiet and protected lagoon, where we swam, while are Dino and Pipo enjoyed in climbing on

the tree branches. As the old song says, “Everything is coming to the end, one day “, therefore also this one full of laughs and fun finished faster than we

wanted. We arrived back to the boat in the early evening. With the sunset, we enjoyed and went to sleep, somewhat earlier. The Saturday’s open-air market, opens early in the morning, at five

o’clock, while already at six, with my friends from the group, I have been on the streets of Puerto Ayora. The main 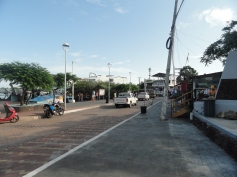 trading place is located on the way to the airport and is something further from the port, therefore we watched with delight as the city wakes up. Some of the products that we found at the stalls were bred locally while most of them are brought by boat from the mainland. The prices were a bit high, 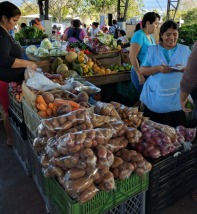 but unfortunatelly we did not have a big choice. That Peter was with us, he would simply enjoy chatting and joking with these wonderful traders, and particularly those of female’s gender. I’m sure with his exquisite charm it could have filled our bags with fruit and vegetables at cheaper prices. We definitely missed him, but I can’t say the same for him, because at that time of the day, he usually enjoys the

sweet dreams. In the afternoon hours, we were supplied with the quantaties of water that we ordered and fuel with which we filled all tanks and spare plastic canes up to the lid. Customs administration and paperwork to leave

Ecuador were ready.  The last check of the electronics, cords, ropes, sails and winches has once more confirmed our readiness for a new adventure. That evening we

prepared two messages in bottles in four languages with a big wish that they arrive to the shore with the wind and the waves, so to those who find

them bring happiness and joy. Before leaving, in the banana shop for $10, we bought a whole branch full of green bananas. It was a great idea, to our longest journey in the hug of 97 bananas, I do not think that even an Orangutan would not be happier more than us. Bananas were placed on the boat, in such a place that we were able to watch them even while we slept.

By raising the anchor, one by one, we were on the way to the starting line. Proudly standing at the bow, my thoughts were wandering over the Pacific Ocean, the largest ocean in the world. With sails full of the wind, we left Galapagos at the direction to the belt of permanent southeast winds of the Equator who

followed Meermowe all the way to Australia. On our route, the first mainland was the island of French Polynesia, Hiva Oa in the Marquesas Archipelago. It’s a small inlet in which I found out that Paul Gauguin and singer Jackass Brel Sampson were buried and whose graves we would like to find if we would have any chance at all.