Once upon a time, long ago, on the Adriatic Sea, at the foot of the seven mountains, Zaro, Serpente, Ghiro, Magno, Paradiso, Rizzi and Vidal, developed the city of Pula. I wonder whether the Brothers Grimm, and back in 1812 years, as well as many today’s croatian writers and poets in their works, were inspired by this old town and writing the story of “Snow White and the Seven Dwarfs”, actually wrote about Pula.

Pula is the largest city and the administrative centre of the Istria. It is a city with a mediterranean climate and the whole region is known for its mild winter, warm summers, calm sea and untouched nature. The city has a long tradition of winemaking, fishing, shipbuilding and tourism, and is a transit port.

Pula is best known for it’s preserved ancient Roman monuments, of which the most famous is “Amphitheatre”, popularly called “Arena”, which dates back to the first century. It is best – conserved amphitheater from antiquity and is the sixth largest in the world. Today, during the summer period, is still used for maintenance of traditional film festival and various cultural events.

The natural beauty of the Brijuni National Park and the turquoise blue Adriatic sea, made the city an internationally popular summer destination.

It is not easy to describe the beauty of Istria and Pula and take a walk through its thousands of years of old history, with a few sentences. Franko Krajcar, famous ethno musician, through one of his songs, gave a credible picture of Istria, the sort that she really is.

The song of Istria

Picture of our dear Istria I’ve carried in my heart

It lays flat and the precipitous on the Adriatic sea

Her head is Uchka Hill and beech her voice

Rasha, Mirna and Dragonja flowing through her veins

Our Istria, mother of us, I carry you in my heart

Most beautiful country for me you are on the Adriatic sea

Peter and I are not so often visited Pula but enough is well know that we can say that we love this city. Due to its geographic position and security we decided to leave our boat in one of its marinas.

Marina Veruda is the city’s tourist district in Pula, which is located in Veruda Channel in the South of Pula between Verudela peninsula in the West and Rudjan or Sandy Bay in the East.

It is surrounded by Mediterranean vegetation and is a place where even today meet daily strokes of fishing. It offers complete services for sailors and its attractive position on the Istrian Peninsula, is perfectly suited to nautical tourism. Marina received the “Blue Flag”, international recognition in environmental protection. This is the point from which you can very quickly get to the Kvarner Islands, such as Rab, Cres, Mali Losinj, Krk, Susak, Silba and Unije. Some of these islands are the destinations in which we will also sail.

At the end of this short walk through Pula, as the initial destination of our journey from which we will sail full heart and sails, we want to inform all of you who are with us that we have reached the end of the first part of writing from the territory of Australia. Meermowe’s Great Adventure that will continue in the month of May upon arrival in Croatia when we will again be together in the way of our life. Through our blog, you’ll experience a lot of excitement, discover new places and enjoy the many adventures. We thank everyone for the given support. 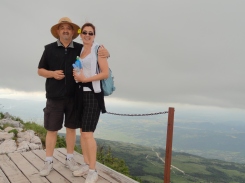